Blog Home Posted by Emma on 2.2.20 in All blogs, Dance, Informative blogs 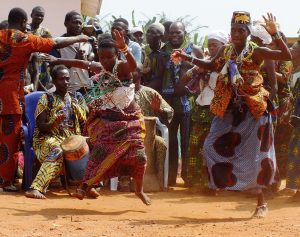 Dances teach social patterns and values and help people work, mature, praise or criticize members of the community while celebrating festivals and funerals, competing, reciting history, proverbs and poetry – and to encounter gods. African dances are largely participatory, with spectators being part of the performance. With the exception of some spiritual, religious or initiation dances, there are traditionally no barriers between dancers and onlookers. Even ritual dances often have a time when spectators participate.

Traditional dance in Africa occurs collectively, expressing the life of the community more than that of individuals or couples. Early commentators consistently commented on the absence of close couple dancing: such dancing was thought immoral in many traditional African societies. In all sub-Saharan African dance, there seems to be no evidence for sustained, one-to-one male-female partnering anywhere before the late colonial era when it was apparently considered in distinctly poor taste. For the Yoruba, to give a specific example, touching while dancing is not common except in special circumstances. The only partner dance associated with African dances would be the Bottle Dance of the Mankon People in the Northwest Region of Cameroon or the Assiko from the Douala people that involve an interaction of Man and Woman and the way that they charm each other.

Emphasizing individual talent, Yoruba dancers and drummers express communal desires, values and collective creativity. Dances are usually segregated by sex, where gender roles in children and other community structures such as: kinship, age, and political status are often reinforced. Many dances are performed by only males or females, which is in part due to many dances having developed in association with occupational activities, and beliefs in gender roles and gender expressions. Dances celebrate the passage from childhood to adulthood or spiritual worship. Young girls of the Lunda of Zambia spend months practicing in seclusion for their coming of age ritual. Boys show off their stamina in highly energetic dances, providing a means of judging physical health.

Teaching dance from an early age

Master dancers and drummers instruct children to learn dances exactly as taught without variation. Improvisation or a new variation comes only after one has mastered the dance, performed, and has received the appreciation of spectators and the sanction of village elders. “Musical training” in African societies begins at birth with cradle songs, and continues on the backs of relatives both at work and at festivals and other social events. Throughout western and central Africa child’s play typically includes games that develop skills in understanding rhythms.

Bodwich, an early European observer, observed that the musicians’ maintained strict time (i.e. concern for the basic pulse or beat), noting that ” children will move their heads and limbs, while on their mother’s backs, in exact unison with the tune which is playing.” The sounding of three beats against two, known as a polyrhythm, is experienced in everyday life and helps develop a two-dimensional attitude to rhythm.

The human voice: the most widely used musical instrument to accompany African dance.

The most widely used musical instrument in Africa is the human voice. Nomadic groups such as the Maasai do not traditionally use drums. In an African community, coming together in response to the beating of the drum is an opportunity to give one another a sense of belonging and of solidarity, a time to connect with each other and be part of a collective rhythm of the life in which young and old, rich and poor, men and women are all invited to contribute to the society.

Intricate patterns in rhythm and movement

Shoulders, chest, pelvis, arms, legs etc., may move with different rhythms in the music. Dancers in Nigeria commonly combine at least two rhythms in their movement, and the blending of three rhythms can be seen among highly skilled dancers. Articulation of as many as four distinct rhythms is rare. They may also add rhythmic components independent of those in the music. Very complex movements are possible even though the body does not move through space. Dancers are able to switch back and forth between rhythms without missing movements.

Drumming seems improvised but is a strenuously rehearsed technique

The drumming represents an underlying linguistic text that guides the dancing performance, with most emotional meaning being derived from the actions and metalanguage of the dancer’s performance. While the spontaneity of the dancer’s performance creates an impression of improvisation, it is a rather strenuously rehearsed technique. The use of this style of dance is not to emphasize the individual’s experience, but instead to mediate the interaction between the audience and the drummers performance.