Balafon basics: what is it and where did it come from?

Blog Home Posted by Emma on 2.2.20 in All blogs, Balafon, Informative blogs, Percussion 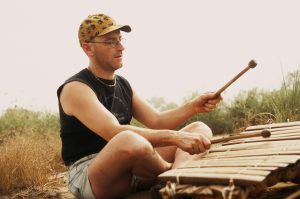 This article is about balafon basics, what a balafon is and where it came from. The balafon is a gourd-resonated xylophone, a type of struck idiophone. It is closely associated with the Mandé peoples of West Africa, particularly the Guinean branch of the Mandinka ethnic group, but is now found across West Africa from Guinea to Mali. Its common name, balafon, is likely a European coinage combining its Mandinka name bala with the word fôn ‘to speak’ or the Greek root phono.

Believed to have been developed independently of the Southern African and South American instrument now called the marimba, oral histories of the balafon date it to at least the rise of the Mali Empire in the 12th century CE. Balafon is a Manding name, but variations exist across West Africa, including the balangi in Sierra Leone and the gyil of the Dagara, Lobi and Gurunsi from Ghana, Burkina Faso and Ivory Coast. Similar instruments are played in parts of Central Africa, with the ancient Kingdom of Kongo denoting the instrument as palaku.

Records of the balafon go back to at least the 12th century CE. In 1352 CE, Moroccan traveller Ibn Battuta reported the existence of the ngoni and balafon at the court of Malian ruler Mansa Suleiman.

European visitors to West Africa described balafons in the 17th century largely identical to the modern instrument. The Atlantic Slave Trade brought some balafon players to the Americas. The Virginia Gazette records African-Americans playing a barrafoo in 1776, which appears to be a balafon. Other North American references to these instruments die out by the mid-19th century.

The balafon has seen a resurgence since the 1980s in the growth of African Roots Music and World Music. Most famous of these exponents is the Rail Band, led by Salif Keita. Even when not still played, its distinctive sound and traditional style has been exported to western instruments. Maninka from eastern Guinea play a type of guitar music that adapts balafon playing style to the imported instrument.

In the Malinké language balafon is a compound of two words: balan is the name of the instrument and fô is the verb to play. Balafon therefore is really the act of playing the bala.

Bala still is used as the name of a large bass balafon in the region of Kolokani and Bobo Dioulasso. These bala have especially long keys and huge calabashes for amplification. Balani is then used as the name of the high pitched, small balafon with small calabashes and short (3 to 4 cm long) keys. The balani is carried with a strap and usually has 21 keys, while the number of keys on a bala vary with region.

Construction of the balafon

A balafon can be either fixed-key (where the keys are strung over a fixed frame, usually with calabash resonators underneath) or free-key (where the keys are placed independently on any padded surface). The balafon usually has 17-21 keys, tuned to a tetratonic, pentatonic or heptatonic scale, depending on the culture of the musician.

The balafon is generally capable of producing 18 to 21 notes, though some are built to produce many fewer notes (16, 12, 8 or even 6 and 7). Balafon keys are traditionally made from béné wood, dried slowly over a low flame, and then tuned by shaving off bits of wood from the underside of the keys. Wood is taken off the middle to flatten the key or the end to sharpen it.

In a fixed-key balafon, the keys are suspended by leather straps just above a wooden frame, under which are hung graduated-size calabash gourd resonators. A small hole in each gourd is covered with a membrane traditionally of thin spider’s-egg sac filaments (nowadays more usually of cigarette paper or thin plastic film) to produce the characteristic nasal-buzz timbre of the instrument, which is usually played with two gum-rubber-wound mallets while seated on a low stool (or while standing using a shoulder or waist sling hooked to its frame).

Any cookies that may not be particularly necessary for the website to function and is used specifically to collect user personal data via analytics, ads, other embedded contents are termed as non-necessary cookies. It is mandatory to procure user consent prior to running these cookies on your website.