Where did it all start?

Blog Home Posted by Emma on 31.1.20 in All blogs, Djembe, Informative blogs, Percussion

A djembe or jembe (/ˈdʒɛmbeɪ/ JEM-bay; from Malinke jembe [dʲẽbe]) is a rope-tuned skin-covered goblet drum played with bare hands, originally from West Africa. According to the Bambara people in Mali, the name of the djembe comes from the saying “Anke djé, anke bé” which translates to “everyone gather together in peace” and defines the drum’s purpose. In the Bambara language, “djé” is the verb for “gather” and “bé” translates as “peace.” In this article we will touch on djembe basics, some general information and the origin of this instrument.

Construction of the djembe

The djembe has a body (or shell) carved of hardwood and a drumhead made of untreated (not limed) rawhide, most commonly made from goatskin. Excluding rings, djembes have an exterior diameter of 30–38 cm (12–15 in) and a height of 58–63 cm (23–25 in). The majority have a diameter in the 13 to 14 inch range. The weight of a djembe ranges from 5 kg to 13 kg (11–29 lb) and depends on size and shell material. A medium-size djembe carved from one of the traditional woods (including skin, rings, and rope) weighs around 9 kg (20 lb).

Sound of the djembe

The djembe can produce a wide variety of sounds, making it a most versatile drum. The drum is very loud, allowing it to be heard clearly as a solo instrument over a large percussion ensemble. The Malinké people say that a skilled drummer is one who “can make the djembe talk”, meaning that the player can tell an emotional story. (The Malinké never used the djembe as a signaling drum.)

Traditional use of the djembe

Traditionally, the djembe is played only by men, as are the dunun that always accompany the djembe. Conversely, other percussion instruments that are commonly played as part of an ensemble, such as the shekere (a hollowed-out gourd covered with a net of beads), karignan (a tubular bell), and kese kese (a woven basket rattle), are usually played by women. Even today, it is rare to see women play djembe or dunun in West Africa, and African women express astonishment when they do see a female djembe player. 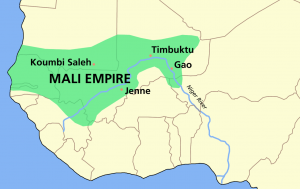 The origins of the djembe

There is general agreement that the origin of the djembe is associated with the Mandinka caste of blacksmiths, known as Numu. The wide dispersion of the djembe drum throughout West Africa may be due to Numu migrations during the first millennium AD. Despite the association of the djembe with the Numu, there are no hereditary restrictions on who may become a djembefola (literally, “one who plays the djembe”).

This is in contrast to instruments whose use is reserved for members of the griot caste, such as the balafon, kora, and ngoni. (The djembe is not a griot instrument.) Anyone who plays djembe is a djembefola—the term does not imply a particular level of skill.

Where did the djembe come from?

Geographically, the traditional distribution of the djembe is associated with the Mali Empire, which dates back to 1230 AD and included parts of the modern-day countries of Guinea, Mali, Burkina Faso, Ivory Coast, Gambia, and Senegal. However, due to the lack of written records in West African countries, it is unclear whether the djembe predates or postdates the Mali Empire. It seems likely that the history of the djembe reaches back for at least several centuries, and possibly more than a millennium.

The goblet shape of the djembe suggests that it originally may have been created from a mortar. Mortars are widely used throughout West Africa for food preparation.

There are a number of different creation myths for the djembe. Serge Blanc relates the following myth, originally reported by Hugo Zemp. Long ago, men did not know the drum; the chimpanzees owned it. At that time, before guns, there was a trapper named So Dyeu. He was the leader of all the trappers. The chimpanzees often came near his camp. One day, he went hunting and noticed the chimpanzees eating fruit in the trees. They were entertaining themselves with a drum. The hunter said, “This thing they are beating is beautiful. I will set a trap.” He dug a hole and laid a trap.

When the hunter arrived at the village, he gave the drum to the chief, who said, “We have heard the voice of this thing for a long time, but no-one had seen it until now. You have brought it to us; you have done well. Take my first daughter for your first wife.”
From that day on the person who played the drum was called “tambourine player”. That is how we got the drum. The chimpanzees of the bush were men who went astray. They had done wrong, so God cursed them and they became chimpanzees. Today, they no longer have drums and they have to beat their chests.