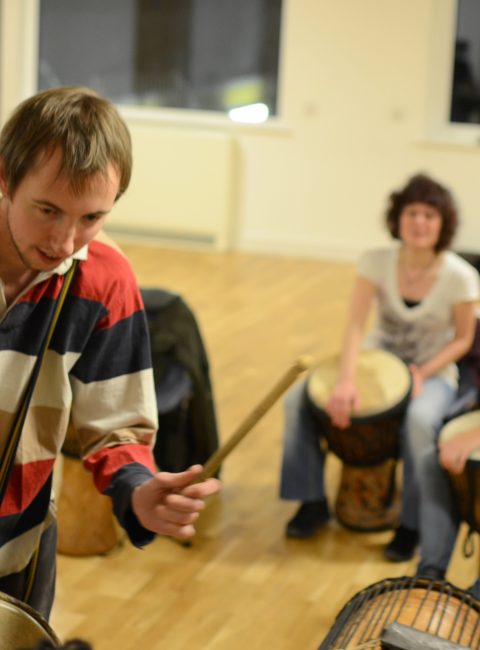 Laurence is one of the UK’s leading djembe teachers and founder of the Drum Africa Community Band classes. Renowned for his inspirational and unique approach to teaching, Laurence combines the best elements of the traditional African teaching method with holistic rhythmical musicianship training.

He studied drum kit and percussion at Trinity College of Music, where he was nominated for the TCM Gold Medal Award after graduating with 1st Class Honours in 2008. While at college he learned World Percussion with Salah Dawson Miller (3Mustaphas3, Justin Adams, The Wayward Sheikhs).

His interest in the world’s folk music inspired him to travel to Ghana in 2009, where he spent 3 months learning with master-drummer, dancer and culture musician Daniel Asare in Accra. While studying with Daniel he gained knowledge of many different styles of traditional music including Kpanlogo, Waka, Gome, Fume Fume and Ewe music, as well as Ghanaian adaptations of djembe music.

Returning to Ghana, Laurence reunited with Ghanaian teachers Daniel Asare and Sadiq Addy (nephew of Moustapha Tettey Addy) in the Greater Accra region in southern Ghana to continue his study of folkloric Ga music and ‘culture’ drumming of all kinds.

In 2018, Laurence lead a music and dance trip to Guinea with Drum Africa students alongside Guinean dancer Abram Diallo (Fore Fote). There he and his students studied with Kader Sylla in Dubreka, while Laurence also reunited with his old teacher Bangaly Kounbasa.

In London, Laurence is a professional percussionist specialising in a variety of styles. He spent many years performing Brazilian music with carnival samba band Rhythms of the City, and still performs regularly with his World percussion and vocal group TalkingDRUM, who perform music from West Africa and Brazil. He has travelled to and studied traditional music in Rio de Janeiro, Recife and Olinda to further broaden his knowledge of Afro-Brazilian music. Laurence also freelances as a percussionist and drummer of all styles.

Laurence has 13 years of teaching experience from primary school to university level. He has taught djembe and kpanlogo to postgraduate music students at Royal Holloway and Goldsmiths universities.

Among the teaching projects he has founded are the AMS Project, African drumming and musicianship classes in primary schools in south-east London; Greenwich Young Musicians, children’s evening musicianship and instrumental lessons; and the Drum Africa Community Band, who learn and perform djembe repertoire, rehearsing every Tuesday evening.

Laurence also runs Drum Africa advanced weekend workshops for anyone who is interested in improving their djembe and dundun musicianship to the next level. In his teaching, Laurence aims to transfer all that he has learnt about the African approach to musical education and rhythm to music of all kinds.

Past Event(s) with Laurence Hill

No past event(s) with Laurence Hill