Blog Home Posted by Emma on 2.2.20 in All blogs, Djembe, Informative blogs, Percussion 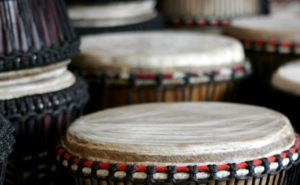 A djembefola’s beating technique determines the sound a djembe produces. For its size, the djembe is an unusually loud drum. The volume of the drum rises with increasing skin tension. On a djembe tuned to solo pitch, skilled players can achieve sound pressure of more than 105 dB, about the same volume as a jackhammer.

Djembe players use three basic sounds: bass, tone, and slap, which have low, medium, and high pitch, respectively. These sounds are achieved by varying the striking technique and position. Other sounds are possible (masters achieve as many as twenty-five distinctly different sounds), but these additional sounds are used rarely, mainly for special effects during a solo performance (djembe kan, literally, “the sound of the djembe”). A skilled player can use the sounds to create very complex rhythmic patterns; the combination of rhythm and the differently pitched sounds often leads an inexpert listener to believe that more than one drum is being played.

Djembe sounds: how to produce them

The bass sound is produced by striking the drum with the palm and flat fingers near the center of the skin. Tone and slap are produced by striking the drum closer to the edge; the contact area of the fingers determines whether the sound is a tone or a slap. For a tone, most of the area of the fingers and the edge of the palm contact the skin whereas, for a slap, the contact area is limited to the edge of the palm and the fingertips. The basic sounds are played “open”, meaning that the hands rebound immediately after a strike, so the contact time with the skin is as short as possible.

Acoustically, a djembe is a Helmholtz resonator: the frequency of the bass is determined by the size and shape of the shell and independent of the amount of tension on the skin. In contrast, the pitch of tones and slaps rises as the tension of the skin is increased. The bass has a frequency of 65–80 Hz. Depending on the size of the drum and the amount of tension on the skin, tone frequency varies from 300 Hz to 420 Hz and slap frequency from 700 Hz to 1000 Hz, with audible overtones reaching beyond 4 kHz.

The difference in pitch of the sounds arises because the different striking techniques selectively emphasize specific vibrational modes of the drum head. Skilled players can also produce a medium-pitched sound (between a tone and slap) that is variously called third slap, tonpalo, or lé. By slightly varying striking and finger position, skilled players can selectively emphasize different slap harmonics and create melodies of differently pitched slaps.