Ngoni basics: what is it and where did it come from?

Blog Home Posted by Emma on 2.2.20 in All blogs, Informative blogs, Ngoni 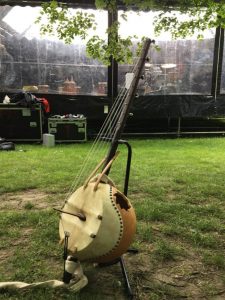 Now, what is that beautiful instrument, the ngoni, exactly and where did it come from? The ngoni or “n’goni” is a string instrument originating in West Africa. Its body is made of wood or calabash with dried animal (often goat) skin head stretched over it. The ngoni, which can produce fast melodies, appears to be closely related to the akonting and the xalam. This is called a jeli ngoni as it is played by griots at celebrations and special occasions in traditional songs called fasas in Mandingo.

Another larger type, believed to have originated among the donso (a hunter and storyteller caste of the Wasulu people) is called the donso ngoni. This is still largely reserved for ceremonial purposes. The donso ngoni, or “hunter’s harp” has six strings. It is often accompanies singing along with the karagnan, a serrated metal tube scraped with a metal stick. The donso ngoni was mentioned by Richard Jobson in the 1620s, calling it the most commonly used instrument in the Gambra (Gambia). He described it as an instrument with a great gourd for a belly at the bottom of a long neck with six strings. The smaller kamale ngoni has entered popular musical styles such as Wassoulou music.

The ngoni is many centuries old

The ngoni is known to have existed since at least 1352, when Ibn Battuta, a Moroccan traveller reported seeing one in the court of Mansa Musa. It is believed to have evolved into the banjo in North America after Mande slaves were exported there. Battuta also reported the balafon. A book written by English musician Ramon Goose about the Ngoni describes its known history, tunings and a beginner’s guide to playing the instrument.

The kamale ngoni or “young man’s harp” is claimed to be invented by the musician Alata Brulaye around the 1950s and 1960s in Mali. It became popular in the Wassoulou region and contributed to the rise of Wassoulou music in the 1970s and 1990s. Musicians traditionally tune this harp using pentatonic scales. There are however exceptions, like Adama Yalomba, who are exploring new horizons and applying heptatonic scales transforming and influencing the younger generation.

Ngoni, not to be mistaken for a kora

During decades both harps followed similar orgonology using a resonance body made of calabash rather than wood such as the traditional lute ngoni. This West African harp was initially played using only six strings but later that number was increased to eight, ten, twelve, fourteen, sixteen and eighteen strings.