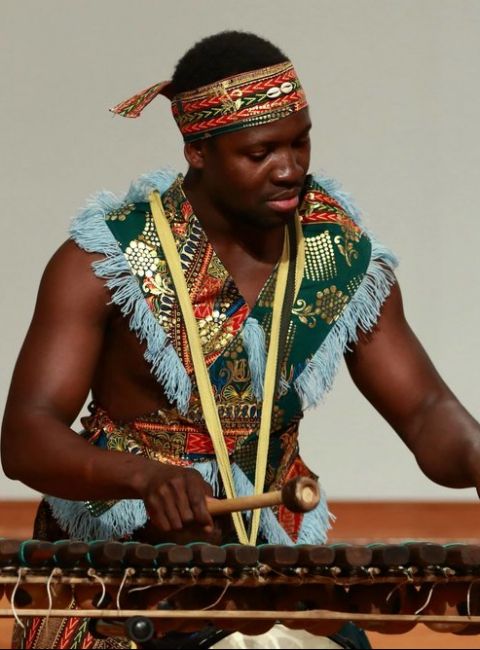 Aboubacar “Abou” Sylla is a master percussionist, musician, performer and teacher of West African music and dance, as well as a traditional instrument builder.

Abou has been performing professionally for over 20 years, and teaches and shares the music, dance and culture of West Africa throughout the United States and around the world. Born into a family of traditional musicians in Guinea, West Africa, Abou began his study of both the djembe and balafon as a child.

He lived, studied and performed with his balafon teacher until he moved to Conakry, the capital of Guinea, to perform with his family, as well as other musicians. At this time, Abou was invited to join Les Ballets Africains, the prestigious national dance company of Guinea. For six years he performed with them, playing not one, but five traditional West African instruments – the balafon, djembe, krin, doundoun and bote. Bramaya, Abou’s West African dance and drum troupe, is named in honor of his father’s village and combines new musical ideas and traditional West African rhythms. Abou has performed and taught workshops for a wide variety of schools, universities, festivals, companies and other organizations including the University of Rochester; Facebook ATX; the University of Texas at Austin, Butler School of Music; the University of Texas at Austin, McCombs School of Business; the University of Florida; Huston-Tillotson University; Miami University; Southwestern University; Bullock Texas State History Museum; the Texas Music Museum Festival; the African Diaspora Dance & Drum Festival of Florida; WobeonFest World Music Festival; Ballet Nimba; Coalition of Schools Educating Boys of Color (COSEBOC); San Antonio Military Medical Center; UMLAUF Sculpture Garden & Museum; SFC Farmers’ Markets; Harmony School of Science; Jollyville Elementary School; Pease Elementary School; Sunset Valley Elementary School and more. Abou’s busy performance, teaching and instrument-building schedule takes him around the world – from the United States, to Africa, Europe and beyond. Abou lives in Austin, Texas.

Past Event(s) with Aboubacar “Abou” Sylla

A three day camp focusing on the djembe plus dance, balafon, dundun and singing with evening performances on…Learn more