Djembe with a big smile 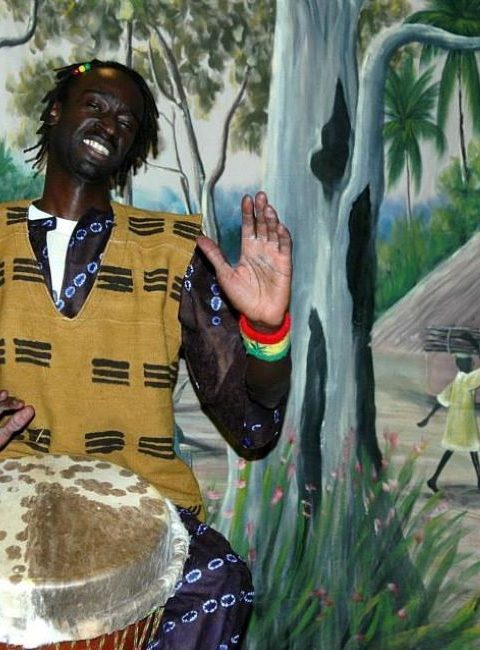 Ousmane Seye is from Senegal and came to the Netherlands in 1995. He was born in Saint Louis and raised in Dakar. He was apprenticed to his grandfather M’Baye Sedèkh M’Bengue and his brother Lamine Coura M’Benge, both well-known Griot (musicians who play on special occasions) from Senegal.

Until 1995 he played as a percussionist and singer in the orchestra Walo Afro Lay of the Center Culturel de SaintLouis and the music group jeunesse Amicale de san Thiaba.

In his 25 years in the Netherlands, he has also been active as a percussionist and works in various groups on CD recordings, film and TV programs. Ousmane had performend at numerous African events, well-known festivals and multi-day workshops such as Back to the Roots festival and Tuka Tuka weekend and of course the foreign workshops in Belgium and France. He also organized a djembe and dance trip to Senegal M’Bour and Dakar twice, together with Victor Sams.

Ousmane feels at home in all kinds of music and instruments, including the gongoma. He is the founder of Yarabi, a band that plays African royal rhythms with influences from jazz and blues. He makes compositions of African music together with Jazz, Afro-Cuban, Blues, Funk and Hiphop.

He has extensive knowledge of various West African percussion styles, including of course the Malinke

He has taught at the Utrecht Center for the Arts and works as a freelance teacher at primary and secondary schools for children, but also gives percussion lessons and workshops to adults in various places in the Netherlands.

He can communicate his knowledge and skills in a fun way to his students. A lesson or workshop with him is experienced by his students as fun and educational, and his enthusiasm and drive gives everyone a good dose of energy. He can be seen live at work on numerous videos on Youtube.

Ousmane is known for his broad smile and inexhaustible perseverance, drawing everyone into the rhythms he explains.

Past Event(s) with Ousmane Seye

No past event(s) with Ousmane Seye